Hubby describes Rome as decaying beauty. It’s so very true. There is so much that can be considered beautiful here, but it’s wrapped in decay. This works for the vegan food scene. There is so much potential, and gems every so often, but the majority of options are flanked by decaying meat. It’s a thing. And I won’t lie that eating has its challenges.

My research before the trip indicated that it would be fairly easy to eat here. Skip the places that ask if you want a table while walking by. Skip the paces that have pictures of the food. Skip the places next to tourist areas. Those seem like relatively easy guidelines. But, honestly, most places fit these pitfalls.

I haven’t gotten sick, so I have been able to successfully navigate the food scene. With my bag of travel almonds.

I have stumbled on a couple fun things. The train station has a store with a few clearly labeled options; a sandwich, a cake, and something they were out of, so I don’t remember. Today I found a coffee shop that had a vegan croissant. I asked for it and the woman behind the counter said, “it’s vegan, is that okay?” I said, “I know, that’s why I want it.” It was clearly labeled. I also found a fully vegan place, but the person there was completely uninterested in serving us, so we left. Oh, and vegan gelato can be found with persistence. Maybe 10% of the places have it. We found one next to Trevi Fountain and the best one is in the Jewish Ghetto. Dark chocolate gelato!

The best find so far was Rifugio Romano. A local Italian restaurant near Termini, the train station. They have an entire vegan section on the menu with vegan versions of all the traditional Italian dishes. Yummers! The two sisters running the place are vegan, super nice, and were thrilled to have us visit.

I was starving and overwhelmed by the options. We decided to start with a salad that had seitan. I was worried it would be like salads in the US that are overwhelmed with the “meat” and have greens whispered at them. This salad was was beautiful with greens. And delicious! 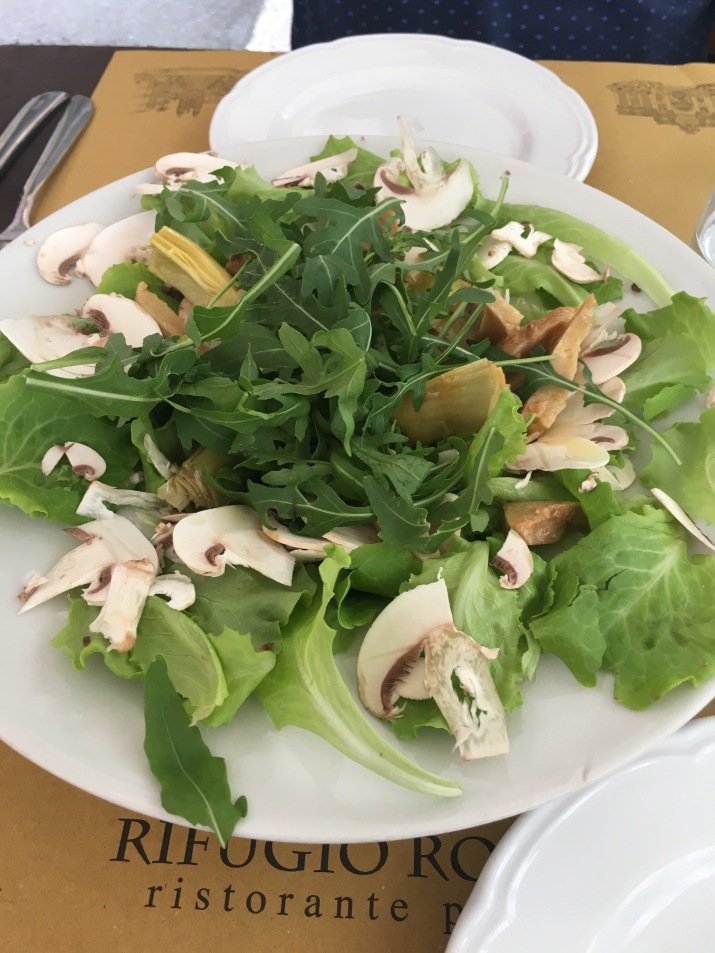 Since I was overwhelmed, I ordered the special ravioli and Hubby ordered the Gnocci with walnuts. I adored both dishes. Hubby was less excited by my ravioli.

Normally, this might have been enough food, but we were hungry. We asked which pizza was the favorite of one of the sisters. She recommended this:

Yummers, again! No tomato sauce. Potatoes, zucchini, tofu, tomatoes, and vegan chunks of cheese. We scarfed this down.

Next was, of course, dessert. Hubby ordered panna cotta with chocolate and I don’t remember what mine was called. It was layers of cream and cookies with chocolate.

Do I need to write it again? Yummers! When we asked for the bill, we each got a shot of limoncello. I know this is a typical thing in Italy, but I had never actually had it happen.

A lovely dinner and I will try to go once more before leaving Rome. If you get here, definitely make it to Refugio Romano that gets five out of five vegan cupcakes.