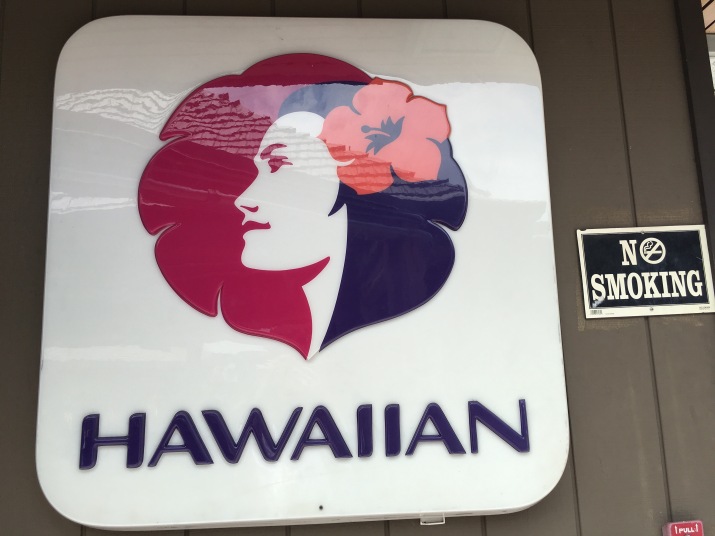 Never take Hawaiian Airlines. I don’t care if it looks like they have the best flights. That is what lured me. It takes a long time to get from New York to Hawaii and adding stops makes it that much longer. There is a mysticism that Hawaiian Airlines is awesome. That the flight to paradise will be even better through this airline. It’s not true. I bought my plane tickets with happiness that was quickly dashed and then ground into one of my worst travel days ever.

After booking my flight online I quickly called the airline to order my vegan meal. With a 10 hour flight looming, I wanted to make sure I could eat. The first person I reached said that the flight was not long enough to have special meals, much less a vegetarian meal. I explained I was allergic and asked to please double check. She was kind enough to double check and said that, no, vegetarian was not an option. They offer no vegan meals at all, no matter the flight length. I asked to speak to a manager. To this second person I calmly explained the situation again and got the same answer with, “but you can bring food onto the plane.” Really? Golly gee. And if I bring something fresh, it will certainly spoil before we land.

I figured there was one last option. I wrote a passionate email to customer service. I was angry by now that I would be complicit in the torture and death of animals by the fact that enough meals would be loaded onto the plane for every passenger. Here is their response:

Thank you for taking the time to contact us, and we hope you have a pleasant flight.

Well, that didn’t help at all. I was definitely blogging about this and told them as much in my email. But, for some reason, I decided to wait. Just in case something would happen between booking and actually going on vacation. It was a good thing I did.

The flight out was one of my worst, and I was one of the people stuck on a plane for 10 hours and changed regulations forever. If not remembering this from about 11 years ago, Google can help.

We got to the airport early, as is always recommended. We boarded our flight on time. We even pulled away from the gate. Then we sat on the runway for 30 minutes, returned to the gate, de-boarded, and waited for painful updates for two hours. At the two hour mark hubby and I asked to be moved to a different flight. Even this wasn’t easy. The first person we spoke with on the phone said it would cost $200 each to change. Nope. A gate agent who had no authority to change our flight said $200 was not true and to call again. The third person changed our flights. She also said we would get a refund due to lessor quality seats on the new flights. That did happen.

Six more hours and we were finally on a flight out to Vegas. That’s 11 hours in the airport. To bring it back to being vegan, none of the snacks offered were healthy and only potato chips were vegan. Food vouchers were also offered if willing to stand in a crazy long line. The airport food options were about as good as the snacks. Hubby found me a falafel pita that was okay. Luckily I had packed a bunch of non perishable food for the flight.

Our flight to Vegas took off late and we had a five hour layover. But, at least we were half way to vacation. We lost a day of time in paradise.

On the way back I still didn’t want to eat the food. Hubby got the dinner and let me take photo of most of it. He wouldn’t uncover the chicken and said what he did try to eat was not great.

I had read online their breakfasts included fresh fruit, so I asked for that.

The fruit wasn’t bad, but there wasn’t much of it. Hubby ate the cheese, crackers, and chocolate that I wouldn’t/couldn’t.

The entire experience was just so frustrating. Just skip Hawaiian Airlines if you can. Vegan or not. American Airlines and Delta will happily schedule a vegan meal if you jump through their hoops.