I was thrilled to be able to host a second tasting party. My friends happily returned to try a variety of yummy foods. 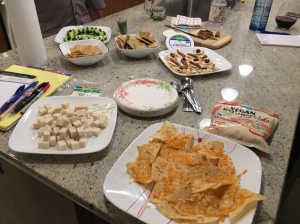 We began with a cheese course. Follow Your Heart Vegan Gourmet sent me coupons to pick up anything I wanted to share. At the Winter Fancy Food Show I got to try several of their new products like Provolone and they are yummy. Since the newest items are not yet available in Omaha, I picked up a few other things I thought my friends might not have tried yet.

Cream Cheese – I have always felt this cream cheese has a strong tart flavor and so I served it on crackers with slices of dried fig or date. Everyone loved the flavor combination. For the cheese, some thought it should be tangier, so totally opposite of my opinion. As I have written before, it’s good to try things for yourself. Unless, of course, I really don’t like something.

Monterey Jack Cheese – This was cut into cubes and served with toothpicks and cucumber slices. I wanted everyone to experience the flavor. Friends thought the texture was a bit mushy, but liked the flavor.

Fiesta Blend Shreds – Served melted over tortilla chips. Follow Your Heart Vegan Gourmet has a reputation for melting well and these shreds followed that pattern. Friends like the spicy kick. 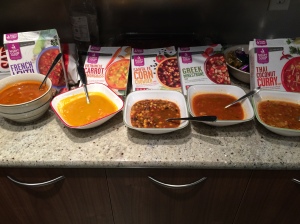 The next course was five different soups from Smart Soup. Locally, I found Smart Soup at Costco and I hope it becomes more widely available. I know in Chicago they are offering a one-for-one, like Toms Shoes or Warby Parker. If you by a qualifying soup, they give one to someone who needs it. Very cool.

Everyone loved all the soups and had difficulty picking a favorite. The soups do not taste salty and instead taste like actual vegetables. One friend said, “I like the chunks of things” and hubby said they make “an easy meal.”

Thai Coconut Curry – Has a nice flavor combination and the coconut is not at all overwhelming. There is a nice spice to the soup.

French Lentil – This soup has a very nice subtle flavor and is hearty. One friend said it has “great veggie textures.”

Greek Minestrone – Does not taste like Italian minestrone, but is very yummy. It combines a sweet and spice that goes well together.

Vietnamese Carrot & Lemongrass – No overwhelming carrot flavor. The lemongrass balances the carrot nicely. Two friends noted this as their favorite and one said it has a “bright and zesty flavor.” 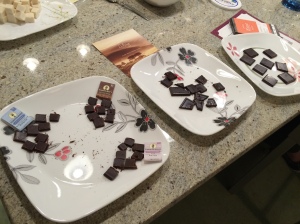 After stuffing our faces with soup, we moved on to trying different chocolates.

Zimt Sweet Orange Nib’d – I had no idea what I was in for with this chocolate. I had tried the plain chocolate with the owner of the company, but this nib’d was a real chocolate experience. The nibs give it intermittent moments of tart that are balanced with sweeter chocolate and a very subtle orange flavor. I enjoyed the unique combination. One friend felt this was “very satisfying” while another noted a “pithy” finish. 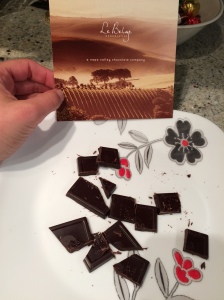 Le Belge – Everyone felt this was the smoothest of all the chocolates we tried. Velvety was noted several times. One friend wrote that eating it is “like licking a kitten without the hairball.” Another wrote, “everything a dark chocolate should be.”

Scharffen Berger – We tried three different chocolates from this brand and everyone was surprised at their sweetness.

Bittersweet was my favorite of the three. It would be great in s’mores and I was surprised by its sweetness. Everyone agreed it was not as bitter as the name suggested.

Extra Dark was less sweet, but not as tart as expected either. One friend noted this one was “almost savory” and another noted it as her favorite.

Another great tasting party and fun time with my friends. Thank you Smart Soup, Follow Your Heart, and Zimt for going out of your way to share your yumminess. I know my friends are already looking for your foods at the store.